In Quebec, approximately 690,000 people live with a rare disease.

With the current effervescence in this niche of excellence, Montréal InVivo has produced a bibliometric analysis of the public research in rare diseases, in order to quantify Canada’s position and contribution to global research, as well as those of Quebec, in this area.

A rare or orphan disease is said to be “rare” or “orphan” because it affects only a very small portion of a population. However, this scarcity effect does not imply less effort in its management. These diseases often represent several challenges in terms of diagnosis and treatment that are becoming more and more personalized. Thanks to the growing influx of new health technologies in Quebec, research and development on rare diseases is faster and more accessible, and researchers in this field are being awarded more grants.

There is currently no Québec rare disease strategy, however the Ministry of Health and Social Services (MSSS) set up a working group for the management of rare diseases in September 2018. Here are some recommendations that have resulted from this Working Group :

Between 2010 and 2019, Quebec published more than 10,000 scientific articles on rare diseases, but it was not specialized in this niche, Ontario dominates with nearly 22,000 publications annually. Of these 10K articles from Quebec, 2,000 focused on diagnoses and 3,700 on rare disease therapies.

Of course, Quebec was not specialized in this niche (SI = 0.89), but it obtained higher impact scores at the global level. In fact, as in other niche markets, Quebec stands out thanks to its specialized expertise in public research.

Quebec’s performance in rare disease research is comparable to that of Ontario. However, Quebec is less specialized than Ontario, and has less impact than BC

In terms of specialization (x-axis), Quebec compares with Ontario and Alberta, while other countries are more specialized in rare diseases (the Netherlands, Switzerland, Denmark, France , Great Britain and the United States). As specialization indicates the importance that a given country or province attaches to a research field in relation to the world level, this implies that the research carried out in Quebec is more diversified in terms of research niche than other countries.

Impact indicates the number of publications in the rare disease research niche (coordinate axis). Quebec has a similar performance to Ontario, but remains behind British Columbia. Quebec researchers therefore publish a significant level of research on rare diseases and have a greater impact on this niche than other regions such as Nova Scotia and Manitoba. 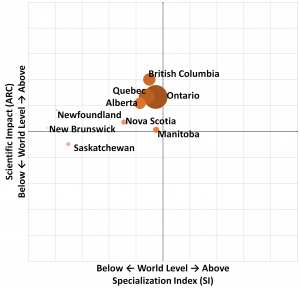 In Quebec, research and care are very integrated in rare diseases, due to the scarcity of expertise in this niche, which explains the lack of specificity in Quebec and the fact that research is present in about twenty therapeutic fields. This dispersal (this varied expertise) is explained by the fact that researchers / clinicians meet the health needs of patients with rare diseases in Quebec.

In general, Quebec is not specifically recognized for its research on rare diseases. However, it obtained a higher specialization at the global level for therapeutic fields such as :

Between 2009 and 2019, CIHR, NSERC and SSHRC provided $ 1 billion in funding for rare disease research in Canada (93% of this amount was awarded by CIHR, 7% of this amount was was granted by NSERC). As Quebec is positioned as a province with strong scientific production, it received 1/3 of the total amount of this subsidy.

Note that many research works are supported by foundations and charities, but this data was not available.

Several initiatives are now being set up at the research level to involve the patient from the start of the process. As rare diseases have to contend with a small amount of health data, it becomes necessary to involve the patient in research. They may even be given specialized treatment for them and therefore expect optimized results from the therapy.

The IRCM’s Rare Disease Information and Resource Center brings together rare and orphan disease patients for better support throughout the care process. This Center also involves patients more in their own health care as well as in research projects. This innovative initiative is made possible thanks to a collaboration between the IRCM and the RQMO.

In addition to initiating innovative solutions, the Regroupement québécois des maladies orphelines RQMO has implemented a Strategy for rare diseases in Quebec in which the patient is at the center. This strategy proposes, among other things, the birth of a partnership between the patient and the doctor to make the patient a partner in his journey of care and services received while playing a key role in the training of the doctors who will be in this journey.

66 companies involved in the development of a diagnostic or therapeutic tool for rare diseases in Quebec, operating in 4 types of industries (Biotechnologies, Medtech, Pharma, R&D Services). Among these, 41 companies are Quebec SMEs, mainly in biotechnology, active in 15 therapeutic fields, in particular neurology, oncology and cardiology.

Laurent Pharmaceuticals is developing treatments for orphan diseases, an orphan drug company with a clinical development program in cystic fibrosis.

PreciThera is a precision medicine company, dedicated to the design and development of innovative biological therapies for the treatment of orphan bone diseases.

Alethia Biotherapeutics is focusing its efforts on invasive carcinomas and the epithelial-mesenchymal transition associated with cancer, two problems for which there are very few treatment options.

Theratechnologies is a commercial-stage biopharmaceutical company focused on specialized therapies addressing unmet and orphaned medical needs in HIV and oncology.

The IRCM is a relatively independent research institute. The IRCM also hosts two clinics on rare diseases in adults. The IRCM sets itself apart in rare disease research, through “drug repurposing” which consists of performing a systematic screening of the 1,200 products marketed and generic each time a gene is identified at the Institute.

The Montreal Neurological Institute and Hospital – NEURO is a world-renowned destination for advanced brain research and neurological care. With the Montreal Children’s Hospital (MCH), it provides a continuum from pediatrics (MCH) to adults (The NEURO) for rare neurological diseases. Its clinical activities in rare diseases, its diagnostic capabilities, its Rare Neurological Diseases Research Group and its translational platforms for rare diseases make this institution a pillar of research in this niche. In addition, NEURO involves patients in the process of clinical research on rare diseases. It brings together leaders in Phase 1 ALS trials.

The Regroupement Québécois des Maladies Orphelines (RQMO), whose foundation was announced on International Rare Disease Day in 2010, brings together rare disease associations, individuals or family members of individuals suffering from a rare disease. and others interested in the cause of rare diseases. The mission of the RQMO is to: provide an information and support service for patients suffering from a rare and orphan disease, their families and for health professionals via its Rare Diseases Information and Resources Center; collect, share and circulate information on rare diseases among various rare disease associations as well as individuals with rare disease; raise awareness among the public and the medical community about rare and orphan diseases through, in particular, the publication of information leaflets and testimonials in the written and electronic media, the organization of activities on the International Day of Diseases rare and by meetings or kiosks in various establishments and public activities; and to advance knowledge on various rare and orphan diseases by promoting exchanges between patients and researchers.

Founded at UQAM in May 2018, the Center of Excellence in Research on Orphan Diseases – Fondation Courtois (CERMO FC) brings together 58 researchers with complementary interests in biomedical and biopharmaceutical research. The objectives of this center are to bring together research forces on orphan diseases in Quebec, to develop a collaborative and partnership research network for their 30 orphan diseases under study and to ensure the psychosocial care of patients and their caregivers

There are currently initiatives developing registries and bio-banks specializing in rare neurological disorders:

Window on several impactful compagnies, researchers and organization that support the ecosystem of health technologies:

Orphan diseases: the glimmer of hope (in French only)

Quebec company Clementia Pharmaceuticals sold for US $ 1.31 billion (in French only)

Rare diseases: the IRCM facilitates the transition from pediatric to adult care for patients

Takeda Lessines: biotechnology for rare diseases (in French only)